An artists impression of the new build Watford Hospital 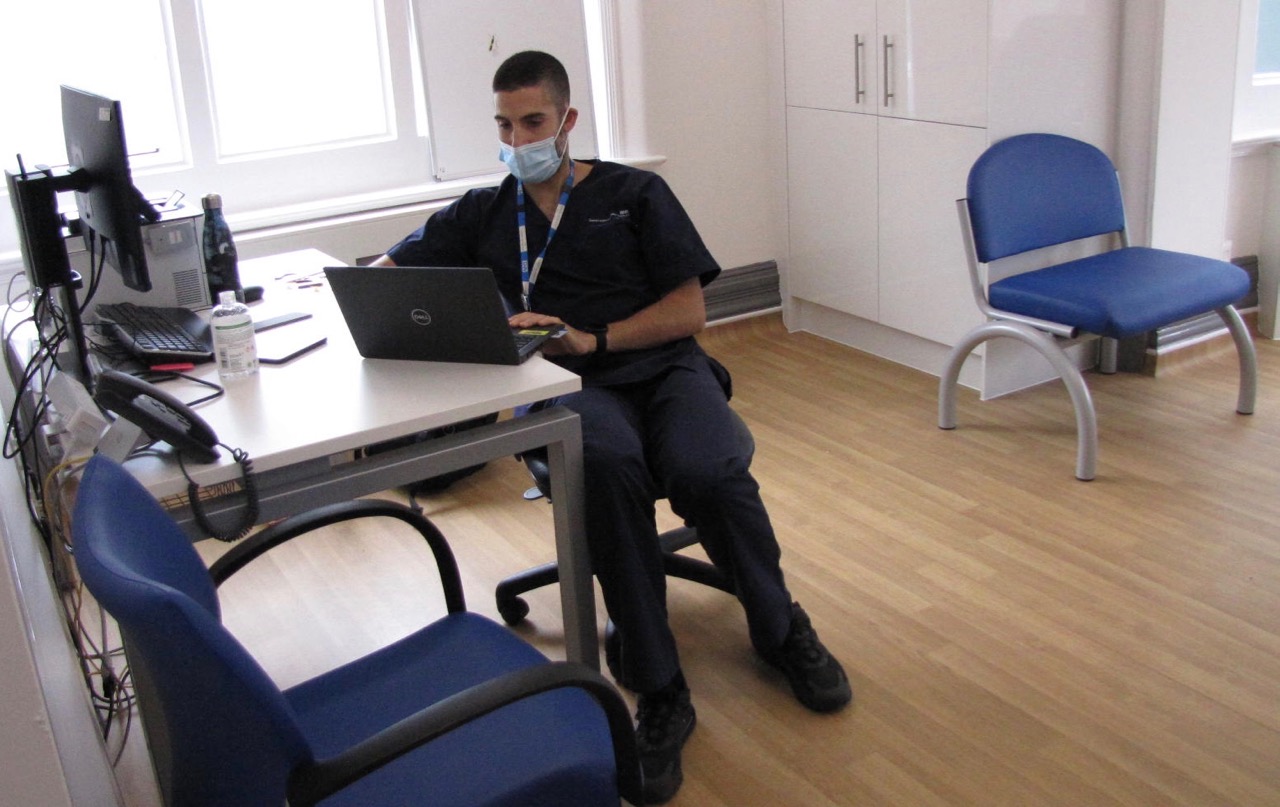 Above. Newly equipped consulting rooms and a reception section now ready for use at Harpenden Memorial Hospital

In our last Annual Report we expressed a view that the Wellbeing Centre promised for the Red House site might not materialise. With the transfer of ownership of the site from the Herts Community Trust to Central London Community Healthcare Trust this now seems a possibility.

We want to ensure that Harpenden residents are regularly briefed on the patient-related services at the Hospital with regular dialogue with  Central London Community Healthcare Trust (CLCHT) representatives and visits to the hospital. Part of this involves the the Society being recognised as the ‘common path’ to CLCHT. We can then enter into discussions about the planned service provision versus a realistic ‘shopping list’ of what is needed at the Hospital. AND that there must be a coherent long term deliverable plan for the estate. We wish to ensure  that the fabric of the hospital is maintained and not allowed to deteriorate any further. We will further our aims by Increased working with local patient groups and other Harpenden networks.

This unit closed at the start of the COVID pandemic, and since then Harpenden residents have continued to use the excellent UTC at the L&D. ( A service we can continue to use)

The Herts Valleys CCG are currently consulting on new access and governance arrangements for the UTC , favouring  allowing access to patients with appointments, who are referred from NHS 111, or their GP practice.This new service is planned to open in April 2022.

This is an ongoing consultation (for several years) regarding the new build Watford General Hospital, and the upgrading of St Albans and Hemel Hempstead Hospitals.

The Society’s committee has agreed that our input into this consultation should be focused on the  transport and access stakeholder group where we are represented by Karl Wingfield.

An independent review in 2019 concluded that the current buildings on the Northwood site are unfit for purpose. Whilst work is progressing on possibly  reproviding the Cancer Centre in a new build on the Watford Hospital site, eventually Harpenden residents may  be served by a new ‘North’ radiotherapy unit at either in Luton or Stevenage, reducing journey times and enhancing cancer treatment.

Connecting Harpenden
Click below for more information about Befriending and Services for Seniors in Harpenden
Befriending
Seniors
Covid delays the development plans for the Red House & the opening of Harpenden's Health & Wellbeing Centre. Click here to see the full story.

The Harpenden Society have for many years, been leading the campaign to ensure that the Red House site is developed with an ongoing medical service for the Harpenden community. And in support they established the Red House Forum in 2012, a ginger group with across-the-board membership, to steer the campaign. Key organisers, still active being Chris Marsden, former Harpenden Society chair, as chairman, with Eric Midwinter and Cllr Teresa Heritage.

This saga shows no sign of resolution despite promises from various NHS providers in the last decade. The Covid pandemic is of course a legitimate reason for delayed action of significance so it is worthwhile to remind ourselves at how we arrived in the current situation. The last 3 years have been traumatic.

The owners of the site Hertfordshire Community NHS Trust (HCT) finally presented their plans for a redevelopment of the whole of the existing Harpenden Memorial Hospital site. They would create a new Health and Wellbeing Centre in the existing Stewarts building (ready for use' by late 2020) funded by the sale of the remainder of the site for a new housing development and the Red House building being converted into apartments..

The future of the Red House development (including the Health and Wellbeing Centre ) was thrown into doubt by fundamental changes in NHS operating structures. Ownership of the site was transferred to Central London Community Healthcare Trust (CLCH) as the new provider for adult community health services in west Hertfordshire from the Autumn.

CLCH announced that the planned opening of Harpenden's Health & Wellbeing Centre would now be delayed until 2023. As the new guardians of the site they have had to assess all the previous work by the Hertfordshire Community NHS Trust, much of it complex, before rationalising and submitting their plans and budgets to Government. The revised plans were due for approval in 18 moths time ( March 2021) with the opening now planned for 2023.

They are reviewing the whole concept proposed by HCT including using the site for house building.

They presented us with floor plans of the Red House building to show Phase 1 of the upgrades which will allow for additional services such as Podiatry, Tissue viability, Bladder and Bowel to be introduced, subject to internal sign off. Works were due to start in early March 2020 and they hoped to complete phase 1 by June.

Further information on the critical development of medical services will be advised going forward. The COVID pandemic curtailed most of the activity and all communication during the year.

Email contact was made with the Capita contact as per Dec 2019. They advised that the Covid difficulties had caused delays but some progress had been made in the areas we have upgraded. The Main Red House building is currently rolling out the Vaccine to NHS staff & Care Home Staff, and CLCH NHS Trust have continued to carry out the upgrade works to the building so this is ready for the services once we are able to stand this back up.

CLCH have to date in the Red House:

The main corporate management team have now relocated into the 1st floor, with additional transformation plans to be rolled out when it is safe to do so. The Stewarts is now owned and managed by another NHS Trust - Hertfordshire Mental Health trust so it does not feature directly in their plans.

Click here to see a report on the above meeting

A letter (dated 22nd August 2012) sent from the Society's Eric Midwinter to Teresa Heritage and David Law about the future of the Harpenden Memorial Hospital can be found here.

A Harpenden Society proposal for the future of the Red House (The Red House Revivified) can be found here.