Significant local opposition to the airport operator’s 19 million passengers per year application  resulted in it being called-in and its fate will now be determined at a public inquiry later in the year.  Separately, Luton Rising carried out a further consultation on its plans to grow the airport to 32 million passengers per annum.  The Society objected to this application emphasising the significant and detrimental impact of increasing CO2 and other noxious gas emissions at this critical point in the fight against climate change (as well as the likely increased traffic congestion and noise).

The Lower High Street was reopened last autumn.  The Society felt this was a lost opportunity to take a longer term view of how the town centre should be organised and also flew in the face of the County Council’s own survey where more than 50% supported the retention of the closures for a trial period. As a result, we conducted our own survey, which resulted in a similar outcome. Responses to our latest newsletter article appear to be split on this issue too.

In the same survey, respondents were more settled on the issue of anti-social parking and the vast majority favoured an approach to the Council to stop parking on the zig zag lines outside Savills and remove two parking spaces outside Simmons to ease traffic flow in this area.  With one exception, respondents also favoured an approach to the Council to tackle increasing levels of anti-social parking in the town centre generally, including parking on pavements, overstaying time limits and parking on yellow lines (when not permitted).

The Society will continue to oppose the airport’s expansion plans, primarily on environmental grounds but also because of the increased traffic and aircraft noise that residents will experience.

With respect to noise, the CAA ‘s plans to alter flight paths across the South have been resurrected and the airport operator is progressing its own proposals expeditiously.

These proposals will have a significant and long-lasting impact on Harpenden residents and we will be publishing a detailed review of them later in the year, ahead of the public consultation.

As mentioned above, we hope to meet with Councillors to address anti-social parking in Harpenden.

We also hope to engage with Councillors regarding the organisation of the town centre to best meet the needs of Harpenden residents and businesses in the future. 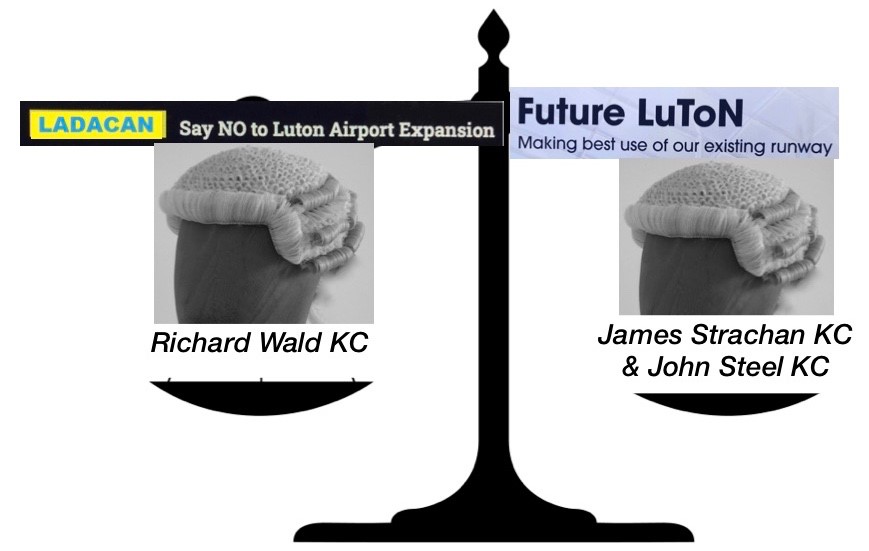 Several local groups including the Harpenden Society have also expressed their opposition.

All parties will be presenting their case to a panel of three Inspectors from The Planning Inspectorate. This will last for a gruelling six weeks. After a month or more the inspectors will report their findings to The Planning Inspectorate who will ensure that all legal requirements have been covered and if positive will confirm the decision to announce their decision to The Secretary of State for the Environment. A date for public announcement will then be made. Likely to be April 2023.

If you want to see the documents being used during the inquiry, click here.

If you wish to know exactly what is happening the inquiry will be live streamed. Contact here to find out how.


Society's response to the February 2021 Consultation can be downloaded by clicking here.

London Luton Airport (LLA) is situated 7 miles north of Harpenden town centre on the southern edge of Luton. It has grown rapidly in recent years: passenger numbers were 6.2 million in 2000, 8.7 million in 2010 and 18.0 million in 2019. Whilst the airport is easily accessible to Harpenden residents, its growth in recent years has resulted in a significant increase in the downsides associated with airports, namely aircraft noise, air pollution, clogged up local transport networks and, of primary importance presently, climate wrecking CO2 emissions.

Furthermore, because Luton Borough Council (LBC) is conflicted, it both owns the airport (and therefore has a financial interest in its success) and is the planning authority for the airport, the explosive growth in the last decade has resulted in planning conditions that were put in place to safeguard local communities being breached and no enforcement action taken. For example, the LBC planning permission for growth to 18million passengers was conditional upon staging expansion over a period to 2028 which allowed for quieter and lower emission aircraft to be introduced. However, LLA took no notice, and the 18million limit was achieved in 2019.

Strategically, the Society is fully supportive of the Hertfordshire County Council (HCC) 'Sustainable Hertfordshire Strategy 2020' which includes 'clean air for all by 2030' yet would be impossible to achieve should LLA expansion plans be realised. Against this background, the Society, working with Bim Afolami MP, local campaigning groups and government agencies, principally the county and district councils, engages with the airport operating company London Luton Airport Operations Lit (LLAOL) and LBC  to try to enforce planning conditions and ensure its future plans don't damage our community. Even to delay the process is positive for Harpenden as it allows for the introduction of quieter, lower emissions aircraft.

LADACAN (Luton and District Association for the Control of Aircraft Noise) https://ladacan.org/

Presently, there is one live planning application before LBC and four consultations at various stages of completion.

This consultation outlines a proposal to separate the Luton and Stansted airport arrival flightpaths. Presently, Luton and Stansted airport arrivals share the same arrivals routes and the same holds. Whilst the proposed separated arrivals flightpaths go over central Bedfordshire, this consultation is relevant to Harpenden residents as includes dispersed or concentrated flightpath options. A concentrated flightpath is similar to the flightpath that was implemented between Harpenden and St Albans in 2016 which has resulted in all westerly departures heading towards eastern Europe following a narrow flight path, which means those within 2km of the flight path hear every aircraft, rather than intermittent aircraft noise as was previously the case with dispersed flightpaths.

Further information about this consultation can be found here: https://consultations.airspacechange.co.uk/london-luton-airport/ad6_luton_arrivals/

An helpful analysis of the consultation can be found on the LADACAN website here: https://ladacan.org/consultation-on-arrivals-flight-paths/

The closing date for the consultation is 5 February 2021.

The Society will be responding to the consultation in due course.

ICCAN was created in January 2019, as an impartial, non-statutory body to rebuild trust between airports and their communities.

ICCAN has produced a document which can be accessed here:

which outlines ICCAN's emerging view on the future of aviation noise management, as well as their vision and goals over the next three years.

ICCAN is seeking your feedback on this document via a survey that can be accessed through the link above.  The closing date for this consultation is 18 December2020.

The Society will be responding to this consultation in due course.

This consultation outlines the airport owners plans to grow annual passenger numbers from 18 million to 32 million. The original consultation has closed and LLAL [an LBC owned company] has advised that it is considering the feedback and plans to submit a Development Consent Order to the government in 2021. The Society and all other local community groups, Hertfordshire County Council and St Albans District Council have strongly objected to this proposal, given the detrimental effect such growth will have on our climate and local communities.

The December 2020 Supreme Court decision to allow Heathrow Airport to apply for planning permission for a third runway has consequences for LLA insofar as Ministers have been advised by their Climate Change Committee colleagues that in order to keep emissions within latest Government policy commitments including Net-Zero, then Heathrow should only expand if regional airports contract.

There is also the conundrum that the Heathrow third runway planning application will now dictate the pace, so we need to ensure LLA is unable to advance their development consent application to the Planning Inspectorate until the Heathrow third runway status is decided. This position is several years away and not aided by Heathrow having disbanded their third runway team and a simultaneous plan by the Civil Aviation Authority (CAA) to modernise flight paths across the south of England (FASI-S). This delay again will allow for 100s of quieter, lower emissions aircraft to be introduced.

This consultation (which has also closed) outlines the LLA plans to ask LBC l to increase the number of passengers travelling through the airport annually to 19 million in the short-term. In addition, the airport operator is seeking to have the planning conditions referred to above set aside and new weaker noise conditions introduced which would mean noise levels wouldn't reduce until 2027, at the earliest.

As above, the Society and all other local community groups, Hertfordshire County Council and St Albans District Council have strongly objected to this proposal, not least because there's no evidence that passenger numbers will even return to their pre-Covid-19 level (18 million) for the foreseeable future and because of the proposal to weaken the existing noise conditions. This LLA application would, if successful, lead to another c8,000 flights per annum intruding into Harpenden airspace.

If you require further information about the airport please email transport@harpendensociety.org