Update on the SADC Local Plan

Work on (yet another) new Local Plan ‘to start from scratch’

Jamie Day, chair of St Albans District Council’s planning referral committee, and vice-chair of its Local Plan advisory group, made clear at a public meeting last week (Thursday 23 Sept 2021) convened by The Harpenden Society that, following several abortive attempts in recent years to draft a Plan acceptable to central government inspectors, the council was obliged to start again with ‘a clean sheet of paper’.

He told over 70 society members, gathered for the first time since Covid restrictions were eased – and for the first time in the splendidly-appointed lecture theatre of Katherine Warington School – that the new LP would have to meet wider criteria than its predecessors, most pointedly in respect of demand for new housing.

A government White Paper with the noncommittal title ‘Planning for the Future’ left many vital issues ‘in the air’ he said, not least in respect of potential sites for new dwellings. As before there needed to be a ‘call for sites’, not just for large developments but also for small, typically ‘brown field’ sites. That process would this time have to be done ‘in cooperation with neighbouring authorities’, principally in SADC’s case with Dacorum (Hemel Hempstead) and Watford.

Dealing with Harpenden specifically, Mr Day said 56 sites in and around the town had been identified, of which 38 were existing, 14 ‘revised’ and 4 ‘new’. The latter were: ‘land to the south of Annables Lane (Kinsbourne Green)’; ‘land adjacent to Batford Mill’; ‘Chelford Fabrics site, Coldharbour Lane’; and ‘plots 3 and 4 Lower Luton Road’.

Mr Day said the council, now under Liberal Democrat control, had set a target of 40% of new housing to be ‘affordable’ though he did not venture a more precise definition for a part of Hertfordshire where first-time buyers (or renters) struggle to get on the housing ladder. However he suggested that the Lib Dem’s capture of the Chesham-Amersham byelection from the Conservatives in June had concentrated the minds of government, especially that of the bizarrely-titled ‘levelling-up’ minister Michael Gove who, perhaps grudgingly, delared Mr Day, had a reputation for ‘getting things done’.

A thoroughgoing Green Belt review by the government had been promised and Mr Day indicated that SADC’s declared policy of incorporating climate change, health and sustainability as relevant priorities in its LP strategy moving forward. That would include

protection of smaller green areas intended to meet local environmental concerns. Tree planting and protection of wildlife habitats were duly earmarked for attention as the wider aspects of the new LP come under scrutiny.

A timetable for preparation of the ‘all new’ LP had been set, comprising a six-stage process involving consultations and submissions, with the aim of its ‘adoption’ (and by implication approval) by the end of 2023.

In a lively Q&A session after Mr Day’s presentation, it was contended that the government’s demand for 300,000 new homes a year to be built was totally unrealistic because it was way beyond the capacity of the country’s construction industry, and Local Plan housing targets should be scaled back accordingly.

David Rankin, chairman of Harpenden Green Belt Association, declared that local planning authorities like SADC should be able to set their own new housing targets – ‘targets we can live with’ rather than those being set ‘from above’, which confer few if any benefits for existing residents.

Harpenden Society vice-chairman Jeff Phillips highlighted the importance of supporting infrastructure, citing the case of Bishops Stortford in the east of the county which gave the go-ahead for thousands of new homes on former agricultural land whose residents were bereft of any schools or social/health facilities. Another meeting attendee questioned the adequacy of the present proposals for hospital provision in SADC’s area should the population increase accompanying the housing plans materialise.

NB. The meeting was held under Government Covid guidelines.

Visitors needing 2 vaccinations with social distancing and mask wearing inside the venue. 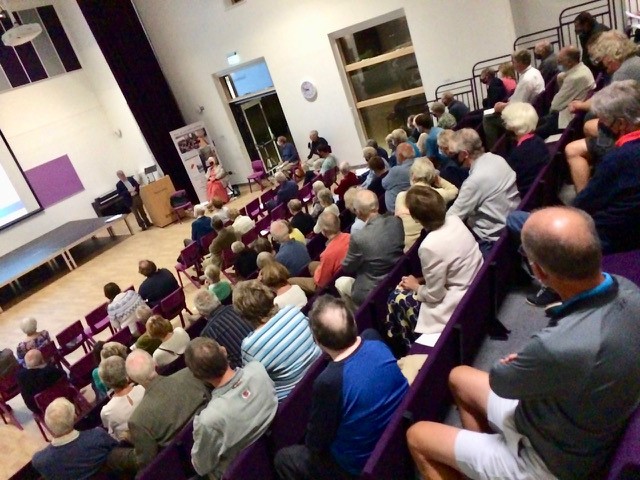